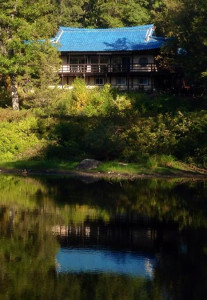 The Kwan Um School of Zen is an international organization of Zen centers and groups founded under the direction of Zen Master Seung Sahn. The School began with the establishment of its international head temple, the Providence Zen Center, in 1972. Over the years, Zen Master Seung Sahn and his students have helped establish dozens of centers and groups around the world.

In 1983, this growth led to the formal organizing of the Kwan Um School of Zen, with the purpose of providing cohesion and administrative support to all of it’s centers. Kwan Um means “perceive world sound,” to compassionately hear the cries of the universe.

A Kwan Um School of Zen of Europe was formed in 1984, with its head temple is the Berlin Zen Center.

Mu Sang Sa, in South Korea, is the regional headquarters for the Kwan Um School in Asia.

The heart of the Kwan Um School of Zen is the practice. Zen Master Seung Sahn very simply taught “Don’t Know”. This means, in each moment to open unconditionally to all that presents itself to us. By doing this, our innate wisdom and compassion will naturally breathe and flow into our lives.

The Zen centers of the Kwan Um School of Zen around the world offer training in Zen meditation through instruction, daily morning and evening meditation practice, public talks, teaching interviews, retreats, workshops, and community living. Our programs are open to anyone regardless of previous experience.

The School’s purpose is to make this practice of Zen as accessible as possible. It is our wish to help human beings find their true direction and vow and to save all beings from suffering.

Please email us if you have any questions